The first and only issue of The Link, ‘a journal for the twin towns of Maldon and Cuijk’, edited by Will Kemp in 1972.

By today’s standards this is not a sophisticated publication, but the pages were bashed out on an electric typewriter and taken to a printers in Witham that was capable of handling the half-tone imagery (of which there is not much!), making this an early instance of desktop publishing – sort of.

Click on the link (get it?!) to view the full publication as a PDF. 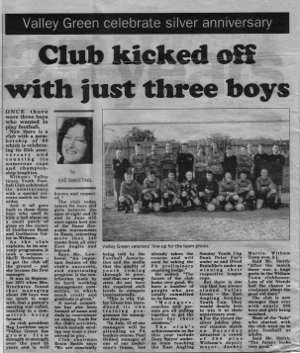 The article transcribed below dates from May 2 1996, when it appeared in the Braintree & Witham Times (more usually known as the Brainless and Witless, quite appropriately as will become clear).

The journalist whose by line it appears under, Eve Sweeting, may or may not be married to the music journalist Adam Sweeting. She ought to be though.

The article, about an Essex youth football club, is intrinsically humdrum, but it was livened up by someone’s injudicious use of a computer spellchecker. They clearly set it to run, perhaps accidentally, accepting all suggestions without checking for themselves to make sure the corrections were sane.

Unfortunately I didn’t save the following week’s paper, which contained a corrected version of the article, but I have managed to retrieve most of the original names that ended up being mangled by the spellchecker. They are: